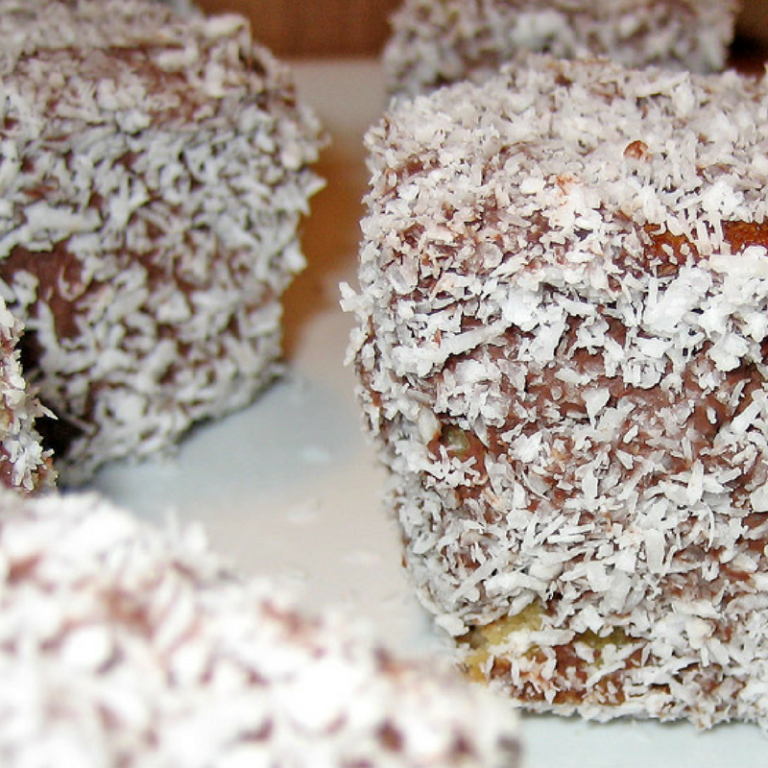 The lamington is an Australian icon, which even has its own ‘world’ day to honour this delicious chocolate and coconut covered treat. After its humble origins as an accidental chocolate covered sponge, there have been many reinventions of the recipe that include things like jam, chocolate and cream filling. Whichever way you enjoy them there’s no denying that Australia’s iconic lamington is a childhood favourite for many who have grown up in this great land.

I remember when I was studying in Spain and we had an International students dinner where we had to make an iconic dish from our home nation. A task that was a little harder than you might think. There are so many things that we good old Aussies borrow from other nations and claim them as our own. Just think about some of our much-loved acting and sporting heroes! We obviously have iconic products like Vegemite and Tim Tams, but I had to make something for this dinner, not just bring along a packaged item (plus, I only had a limited supply of Vegemite that I wasn’t too keen on parting with). So, after some brainstorming, I finally settled on the iconic lamington.

This sweet, fluffy cake was sure to be a hit, but I then realised that I didn’t have access to an oven. I didn’t fancy trying to make a sponge cake in the microwave either. After much searching around, I finally found a store bought sponge cake to use as my base. Not ideal, but the icing component is just as important right? Chocolate + coconut = happiness. In the end, it worked out fine and they were a hit. Since then, I have scoured old cook books along with numerous cooking sites and believe I’ve found one of the best classic recipes, which I’ll share with you shortly.

For such an iconic Australian recipe, the history of lamingtons is a little muddled. Once listed as a national icon by the Department of Foreign Affairs and Trade, it seems nobody can quite agree on where the lamington was born.

Most accounts seem to agree that the lamington was named after Lord Lamington, Governor of Queensland at the turn of the 20th century, or his wife. But who made the original lamington, and why is a little more controversial.

One theory is that Lord Lamington’s French chef Armand Galland created the recipe (proponents of this theory like to point out that Galland’s wife was Tahitian, so could have introduced him to coconut, then a relatively unknown ingredient in Australia). Another account puts Government House temporary cook Fanny Young in the driver’s seat after dropping the sponge in chocolate by accident, while for others, Amy Shauer, a cooking instructor from Brisbane Technical College gets the credit. No matter, the exact person behind the creation or even why they created it, doesn’t stop this from being a delicious Australian icon that we can truly call our own.

It would be quite un-Australian of us to ignore the significance of one of our very own icons and there is even an Australian Lamington Appreciation Society (ALAS) which is committed to the preservation of their world famous Lamingtons and annually celebrating Lamington Day.

In honour of World Lamington Day (July 21), here is one of the best rated classic lamington recipes I’ve found.

1. Preheat oven to 180°C/160°C fan-forced. Grease a 3cm-deep, 20cm x 30cm (base) lamington pan. Line with baking paper, leaving a 2cm overhang on all sides. Using an electric mixer, beat butter, sugar and vanilla until light and fluffy. Add eggs, 1 at a time, beating well after each addition (mixture may curdle).
2. Sift half the flour over butter mixture. Stir to combine. Add half the milk. Stir to combine. Repeat with remaining flour and milk. Spoon into prepared pan. Smooth top. Bake for 30 minutes or until a skewer inserted in centre comes out clean. Stand in pan for 10 minutes. Turn out onto a wire rack. Cover with a clean tea towel. Set aside overnight.
3. Make icing: Sift icing sugar and cocoa into a bowl. Add butter and boiling water. Stir until smooth.
4. Cut cake into 15 pieces. Place coconut in a dish. Using a fork, dip 1 piece of cake in icing. Shake off excess. Toss in coconut. Place on a wire rack over a baking tray. Repeat with remaining cake, icing and coconut. Stand for 2 hours or until set. Serve.

If you’d prefer to buy some delicious lamingtons, check out this compilation of where to find the best lamingtons in Australia.

If this has your mouth-watering, check out some of these delicious chocolate shops